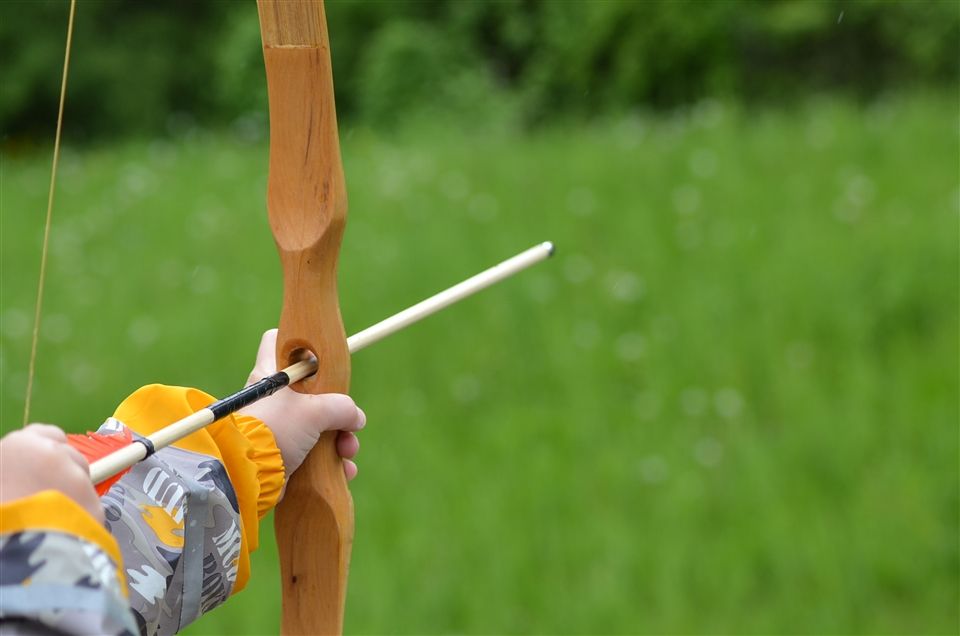 1/8/2021
Gil Gallagher
I don’t know what future awaits my son or the students in my care now or the students who will join us next year or in the years to come. But I think we get to make choices about how we proceed from that place of fear.

This year we got my son, Esta, a toy bow and arrow out from a toy catalogue that had become one of his favorite books. His grandparents got him a stomp rocket. That’s Esta—a projectile himself, and fascinated by anything that flies or moves or could knock something (or somebody) over. We have a strict no projectile policy in our home, and the box advertises that the bow and arrow can shoot up to 100 feet. So we asked him, “Where do you want to go to shoot it?”

Without hesitation, he said: “Daddy, let’s go to your school and shoot it on the field!”

So we loaded up the car and snuck onto campus (sorry, Lori).

It was very cold and very windy, far from ideal conditions for a childhood missile test, but we’re not sure Esta actually experiences cold, and my wife and I had both focused on warmth in our gifts this year. (I’m ready to be teaching with the windows wide open in February!)

If you’ve ever shot a bow, you’ll know that it requires quite a few different skills. Fine motor skills to notch the arrow on the string. Left / right coordination to hold the bow with one hand, while the other pulls the string back. And then a whole neurological symphony in aiming, considering wind resistance and direction, estimating the arc of the arrow and the force created by the bow and string. And then the confidence to release.

Esta is almost five and has had a rough time in school, and his confidence in things outside of his areas of expertise is very low. But the first time he strung the bow and shot it (with a ton of scaffolding from me), the arrow went basically where he aimed it. It didn’t go very far (I don’t know under what conditions this thing would shoot 100 feet), but it went where he wanted it to go, and he could clearly see the payoff of his focus and concentration.

The next few attempts didn’t go as well. I think his hands were getting cold (he would deny that), so it became more challenging for him to notch the arrow on the string. Once he would get it notched, he had to switch his focus to holding the bow, steadying the head of the arrow, and pulling the string back, and then the arrow fell off the string, and he had to start over. He got it all working at one point, and then he released the string and the string slapped his forearm. Luckily he was wearing the sweater we forced him into. The arrow fell to the turf at his feet.

My son has a low tolerance for frustration and can be pretty volatile, so I let him turn away, and he ran off towards the center of the Field, where his stomp rocket was setup. After a long, loping runup, he launched himself into the air, pounded his feet down on the launcher, and the little rocket flew up maybe 15 feet. He proceeded to repeat this act again and again and again, his mother and I watching from some distance, the forcefield he had magically created keeping us at bay.

At some point I noticed in the background, up the hill, the building that contains, among other things, the ceramics studio, the dark room, the strength and movement room and the gym. The word “wonder” in big black letters on white brick caught my eye. My attention drifted back and forth between my son stomping his toy rocket and that word on the side of the building, a building I’ve been looking at on and off for the last 18 years.

That word has particular resonance at Field. There is, of course, the famous story of the school’s origins in the Wonder building, and the day we moved to our old campus on Wyoming Avenue and had the student body carry the furniture up Connecticut avenue. But I don’t think that’s what drew my eye or caused my mind to settle there as my son bounced and crashed and ran.

These are anxious, fearful times. This pandemic has altered our lives in so many ways, and the work we are now called to do with children—our own children, other people’s children—has fundamentally shifted. I don’t know what future awaits my son or the students in my care now or the students who will join us next year or in the years to come. And that uncertainty and sense of fear often feels overwhelming. But I think we get to make choices about how we proceed from that place of fear.

Wonder functions as both a noun and a verb. As a noun it is an object of astonishment, a thing that makes our jaws drop, our spirits lift. We feel small in the face of wonders—Half Dome, the Grand Canyon, the Pyramids at Giza, Machu Picchu. My son feels this way about certain creeks in Rock Creek Park, and I sometimes try to tap into that sense of wonder he feels about everyday things, that gift of childhood.

As a verb to wonder is to put yourself into the state of being awestruck, in the presence of miracles. It is also to question or to doubt. When I give feedback to teachers and to students, I often frame my feedback in the form of “wonderings”—a linguistic framing I learned from Kathy, a dear colleague.

I think watching my son run against a cold, clear sky with “wonder” behind him in big letters placed me in that double-state—of being in awe of the miracle of his life and of being filled with questions. I think that is the double-state we find ourselves in right now, and for me that is the choice we get to make right now. In place of fear (which never disappears entirely for me, but can recede) I choose wonder, for my son, for my family, and for the school that has been a kind of home for me for most of my adult life.

We have many big questions to tackle as a school and in the field of education. And I hope to document and share some of our wondering here in this forum.